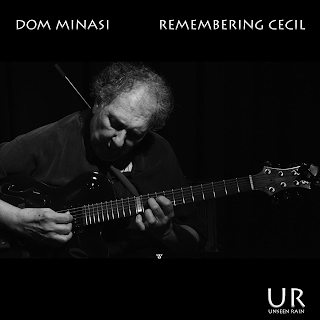 If you've never tried (assuming you play guitar) you may not realize how difficult, even counter-intuitive it can be to play "completely free" on the guitar. Part of it is percussiveness, gravity, the way that hands situate to the keyboard versus a fretboard-and-finger action that is not a first reaction-inclination if you are say three years old and somehow get next to a guitar. And in some ways it explains why we might find more absolutely freestyle pianists than guitarists? A child may sit down to a piano and wang away at it without a whole lot of thought. Because it is a percussing. Plucking is less obvious. On a guitar really you must already know how to play it pretty well or very well before you can hope to address a potentially valid "free" and completely open improvisation.

That does not mean an excellent free improvisation on the piano is something easy. It is not at all easy. If we lost a titan of the free improv piano around a year ago, that is the giant Cecil Taylor, we are in many ways still reeling from the loss, for he was one-of-a-kind, not someone you replace so much as keep in memory and pose as a model for such things regardless of the instrument. He was brilliant and so far beyond a merely intuitive stance as to be in the same select league as all exceptionally great players of instruments in human history.

Given all that guitarist Dom Minasi, someone readers of this column I hope know of and appreciate as one of the living lights of the guitar today, aimed recently to pay tribute to the master free improviser pianist in a full set of solo electric guitar entitled Remembering Cecil (Unseen Rain UR9912).

The album is the ultimate challenge of artistry at its most exposed. Just Dom, his guitar and the recording apparatus. He gives us four free improvs that as Dom notes in the liners, are a culmination of his 30 years of playing freely and so too of appreciating the music of Cecil Taylor.

What most intrigues me in listening long and carefully to Dom is the reality that he sounds like no other guitarist when he plays, both in a more straight-ahead mode as well as freely, and that he is a very original free guitarist with a style all his own. As he mentions in the liners this is not "atonal" music but it is not pre-planned nor is it in any set time frame. It cascades. It tumbles. It makes use of all the guitar technique, the considerable guitar technique and schooling Dom has gained and maintained over a lifetime of playing. The technique Dom has accumulated is put to use in a very personal way, in other words, and that is what makes his identity strong and thoroughgoing.

The improvs perforce do not sound at first blush identifiably like Taylor's playing, but that in many ways is because the guitar has its own challenges and playing free on the instrument means a different set of possibilities. And so there is a underlying closeness between the two players in intent, but not in the ultimate sound.

In the end as a free guitarist he sounds completely like himself--not like Derek Bailey, not like Sonny Sharrock, not Elliot Sharp. Like Dom Minasi. In the course of this album you hear the artist just as he was recording this in real time, a kind of self-portrait that is also necessarily a kind of portrait of Cecil Taylor.

And in the process we find on close listening one of the gem examples of free guitar art. And so there you go.
Posted by Grego Applegate Edwards at 9:33 AM No comments: 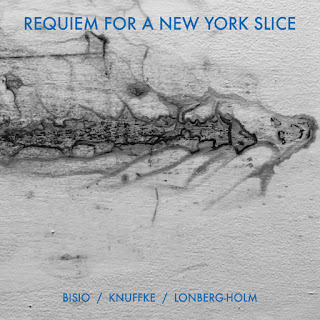 Truism: the improvisational world in its finest flower these days is a bit underground compared to something like Duke Ellington or Count Basie in the '40s. It is true in spite of some foolish talk out there that has nothing to do with the value and merit of the music itself, any more than an illusion-example that you might hit on that shows how ridiculous the idea is: if you claimed that Johann Sebastian Bach could not be very good since he did not make enough money or reach all that many people in his lifetime. The economy of the arts changes and that in the end has nothing to do with the quality of the music at any point.

So the music I talk about today will no doubt not be on anyone's best-selling music lists. I mean the double-platinum loot and all that stuff. And so what? Fact is the trio of Michael Bisio on acoustic bass, Kirk Knuffke on cornet and Fred Lonberg-Holm on cello is one of the high points of advanced free improvisation today to my mind, at least on the latest CD at hand, Requiem for a New York Slice (Iluso IRCD17).

Why do I say this? Playing freely is not just a matter of everything is great and "go man, go!" People singly and in units invent worthwhile things or they do not, or of course possibly something in between. In this case we have five improvisations that are excellent. It is a matter of the whole and the parts of course, and not any of either is necessarily equal to another. Here the level is high, in all senses.

Yes, Count on it. Here the level of invention is high throughout. The bowing-plucking possibilities of Bisio's contrabass and Lonberg-Holm's cello set up a textural matrix that contrasts very nicely with Knuffke's cornet.

All three are major players, it perhaps need not be said, and together they are something special. Each are at the top of my achievement lists (in my head) for their respective instruments today. And this album is one of the best examples of their art. So if such things interest you I suggest you give this music your full attention. Buy it. Hear it. Be cool. Make friends! I kid you not. This one hits on all cylinders and never lets up. It is supremely inventive trio music. So listen!
Posted by Grego Applegate Edwards at 10:05 AM No comments: