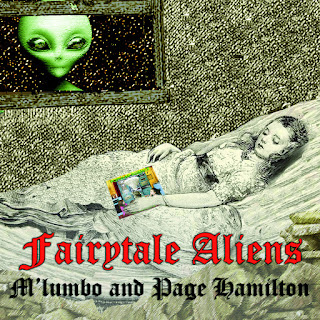 A new M'lumbo album to me is an event, since their wall-of-sound Futurist Psychedelia is not quite like anything else out there, truly. Now we have a latest one, teaming up with Helmet guitarist Page Hamilton. Fairytale Aliens (Ropeadope) brings together Page on guitar with core M'lumbo men Robert Jordan Ray Flatow on keyboards, "suitcase symphonetta," "ectoplasmic radio," bass, electronic and acoustic percussion, voice, harmonica, and production-producer; then there is Paul-Alexandre Meurens on tenor sax, electronic and acoustic percussion, "cytoplasmic cheese synthesizer," assistant producer, flute, bass clarinet, bass, voice and shoes. They are joined at times by other friends but in the main it is the threesome who are responsible for the sprawling organic-electronic sympho-voltage.

I was surprised as I listened, absorbed, to recognize all-at-once that the M'lumbo sound is the Futurist progeny of John Cage's Variations IV, the late-'50s collage of Cage and Tudor mixing together long playing albums as an eclectic melange of musical styles, sound effects and adding live gallery sounds of visitors talking, etc. It was an innovative go of things and the M'lumbo density we hear in a most exemplary way on Fairytale Aliens is a highly original extension of the all-over sound. Not that M'lumbo deliberately sets out to "do Cage," just that the history of the future includes such things as subsets of themselves, in interesting ways.

The content though is entirely another matter. It is M'lumbo, Page and friends playing their special arrangements of some classic rock--"You Really Got Me," "Strawberry Fields" and "Sleep Walk" along with original music and special sound tapestries, etc. The mix peppers the band's large sound with samples that contextualize and thicken things, not only of the band itself playing against itself, but recorded excerpts of speeches, cartoon voices, etc that serve to encapsulate it all in a Futuristic time warp.

So the original "King of the Moon" juxtaposes segmented samples of JFK space-age speeches, cartoon snippets, into the thick musical collage for a kind of total immersion in sound.

Happily it all works resoundingly well, with Hamilton's guitar a key element on "Sleepwalk," "Strawberry" and "You Really Got Me" as typically excellent examples.  The totality of it all gives us a kind of psychedelic epic, a vintage dream of the future looked back upon and made most poetic.

And so it is certainly one of M'lumbo's best outings, moving and making total sonic sense for a kind of post-Sgt Pepper, post-Cagean, post-'60s Avant Rock studio presence into a future and so realizing the promise of the past. One must meet the music half-way because it is a complex sonic thing. If you do I think you will find it as enthralling as I do. Do not let this one slip by. Do not miss it.

Posted by Grego Applegate Edwards at 7:30 AM No comments: