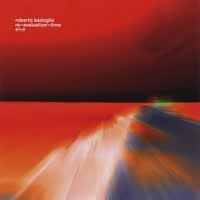 Jaco Pastorious did much to establish the electric bass as a solo instrument capable of standing in the front line with the best of the improvisers. He also played an ensemble bass that used double and triple stops and thus could function as a harmony instrument as well as a single-note anchor in the rhythm section. Of course, he also had a unique sound that has been widely imitated.

Now onto the scene comes one Roberto Badoglio, a young master of the five-string electric bass. His re-evaluation-time (Spice Rack), just out, shows him a player of absolutely mind-bending technical abilities and good musical imagination.

This is fusion. The tunes are just fine as is the backing band. But it is Badoglio's playing that far and away captures one's attention from the very start. He uses the full range of the instrument, plays chords, and plays solo lines that are just short of breathtaking. This is a bassist that plays with the ease and continuity of a fine guitarist. As far as the fusion part goes, it is a bit on the generic side. But who cares? It's the feeling of awe you get listening to this young man have at it that matters! Electric bassists and their fans will be astounded.
Posted by Grego Applegate Edwards at 5:00 AM