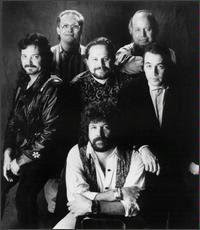 February 4, 2009—Today starts a series of blogs on jambands. In the coming months I’ll be looking at a bunch of bands as represented in the "Live Music" section of the site www.archive.org. There are thousands of live shows reposited there by bands that give permission to tape and disseminate their performances (provided they are traded or given away free, but not sold commercially). You can check out the shows of a particular band by streaming or downloading what’s on the site, searching by band name, then date or other factors. I’ve spent hundreds of hours lately immersing myself in the various offerings there. I’ll be covering some of the more interesting or representative shows from time to time here on this blog. I must note that of course if you like a band you should support them by paying for their regular releases and/or catching them live.

First a little history, much of which may be quite familiar to readers, but not everybody. Starting in the late ‘60s there were a number of bands that regularly included jams as part of their live shows. Cream, Hendrix, and the guitar hero sorts of bands did that regularly. The San Francisco groups were especially appreciated at the time as artists who did much to promote and develop these sorts of practices—the Airplane, Quicksilver, and of course especially the Dead. And it was in part due to their longevity and in part by their preferences that the Dead built a huge following who appreciated the long jams and musical forms involved, centering mostly around Jerry Garcia and his formidable inventive abilities and what the band did as a whole during these segments.

Well, when Garcia passed there were many Dead-dedicated groups playing out there in the local bars and stages across the US and beyond, but I suppose it was Phish that gained the most recognition by building a repertoire and stage presence that continued in the Dead tradition of ever-changing set lists and plenty of jam space. Sometime around then as more bands and audiences began to take to the idea that this kind of music was something to be expanded and appreciated on its own terms, the name “jamband” began to be applied.

The big record conglomerates have covered this music when and if a group had what is considered potential “hit material.” But it is clear that as far as Jamband status is concerned, a band can create quite a cache for themselves without such support, especially with the medium of the internet as a factor.

In my informal survey of the Archive’s live music holdings, I found that, as with any music form where there a great number of people involved, there can be imperfections or negative musical factors at work with some of the bands. I’ve found that many bands are strictly Dead clones or so close to the Dead that they have no real identity of their own. This can be found either in the songs themselves and/or the jams, which may closely ape what Jerry and company’s jams sounded like at any particular stage of the Dead's existence. (This of course is not a bad thing if the band contains former Dead members, like with Ratdog, Phil Lesh and Friends, etc.) Other bands may play lackluster originals that detract from the show. Sometimes a facile kind of funk may become a crutch to what is going on in a set. Sometimes the jams are undirected—the lead guitarist may not really have many ideas and to go on at length can be a little snoozy. The rhythm sections can be stiff with some folks, really not up to the standards set by the Dead at their best, so that a groove never develops.

On the other hand I’ve experienced some truly interesting bands and shows on the Archive. And I’ll be noting what’s good out there as I address particular shows in the months to come.

Today’s show involves a band that’s as old as dirt, or nearly so. New Orleans’ Radiators formed in 1978 and still make the circuit today with the same original five members. That is a rarity out there. They may not have had much conventional music business success as far as the “hits” go, but their live shows are exciting, party and jam get togethers. I’ve been listening to a full, three-CD performance of the band recorded live at the Great American Music Hall on March 20, 1993. The sound quality is very good and they run through originals and interesting covers—everything from Blind Willie Johnson’s classic “Everybody Out to Treat a Stranger Right” to Creedence’s “Born on the Bayou.” Now these guys don’t get involved with 20-minute jam sequences but there’s a looseness and some nice guitar soloing throughout. The show catches them in their middle period more or less and by 1993 they had really found a nice groove on just about everything they did. So I’ll cover more of these shows from time-to-time. Stay tuned.
Posted by Grego Applegate Edwards at 8:03 AM