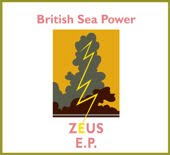 The Decline of British Sea Power is one of the most interesting of today's indie rock bands. And they have become quite prolific, with the Zeus EP (Rough Trade) out in the latter half of this year and another full CD coming early in 2011.

I've been listening to the EP and it's something that grabs your ear. The songs are quirky and memorable, the vocals strong, the arrangements enveloping and singular. And the music has an edge to it, which I appreciate. In other words they continue to move in areas that made them stand out in the first place.

It's what's going on today. That is, it's what's GOOD today. One of those groups that one follows with interest. At least I do. Zeus. Come down from his cloudy Mt. Olympus.
Posted by Grego Applegate Edwards at 5:00 AM