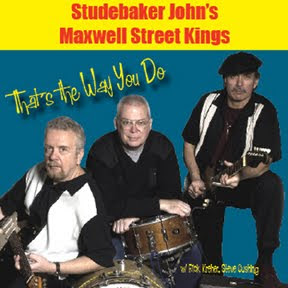 The Chicago blues have never died. Judging from some choice recent releases, it never will. Studebaker John (and His Maxwell Street Kings) have a new one. It is one of the affirmations that proves the rule, so to speak. That's the Way You Do (Delmark 810) literally teams over with 15 original gems that bring to the fore all the Delta-come-up-to Chi-town sounds that helped define American music over the years.

Studebaker John Grimaldi uses his powerful vocal attack, full-throated harp wielding, and electric-electrifying slide guitar to give you the blues the way it was meant to be heard. Raw, exciting and in-your-face. He's joined by the hotly supportive Maxwell Street Kings, which consists of second guitarist Rick Kreher (who was with Muddy Waters at the end) and drummer Steve Cushing (host of the Chicago radio show Blues Before Sunrise). They give Studebaker the real deal with churning power blues chording, crackling backbeats and relentless shuffle grooves.

But it is Studebaker John himself that puts the music into orbit. He has BECOME the tradition and gives it back in ways that remind we why Little Walter, Muddy, the Wolf, and Jimmy Reed set me on my tail when I was young. The blues may be deceptively simple in form, but playing them with style and conviction isn't. Studebaker John DOES. Yes, he does.
Posted by Grego Applegate Edwards at 3:40 AM