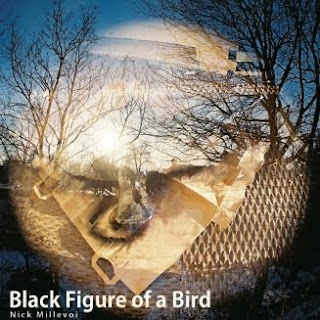 This past March I covered the avant power trio Many Arms and their high energy assault speed metal. The guitarist on that was Nick Millevoi. Nick has been busy since then, among other things putting together a solo CD of 12-string electric guitar pieces, Black Figure of a Bird (Sundmagi na001). It just came out and will no doubt be turning a few heads around.

Essentially Nick has created some structured outness for six episodic segments that have an overal aura about them but also pacing and variational depth. He uses the full sonarity of the 12-string. He'll deviate from standard tunings (it sounds like) to fashion open resonant chords of an unusual sort, make interesting use of chiming harmonics, then come in with dynamically alive industrial trance figures (sometimes sounding a hair like late Crimson or the League of Crafty Guitarists only much more insistent), and so on.

There is a good deal of really interesting guitar work happening on Black Figure. The sounds he gets set him apart; the note choices, chord voicings and rapid strummings put him in a league of his own.

This is sometimes startling, ever-engaging, bright-dark and brittle music. And what seems most encouraging to me is that it is music first and foremost. It is rather remarkable as guitar music as well but you go away from the disk knowing you have heard good music.

Welcome to the Millevoi Zone....you can get there from here. I recommend that you make the trip.
Posted by Grego Applegate Edwards at 4:31 AM