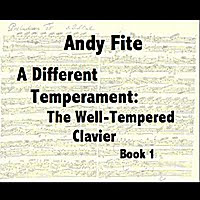 An indie music distribution source of some note that carries this album stated in their usual "people who like x will like this" section that those who like Django Reinhardt, Bach and Warne Marsh will find this album to their liking. Well, I guess. This may be the only album I can think of where those three names don't seem like a stretch. Aside from talking about why Warne Marsh and not, say, Tristano, Konitz, or Connie Crothers (and I suppose that is a moot point in terms of rough net approximations), I must say that Andy Fite makes such combinations seem natural and also seem more like Andy Fite than a combination.

Here I am rattling on but it is usual to name here the title of the album and such, so: A Different Temperament: The Well Tempered Clavier, Book One (Other Street Music). It's Andy on one or more tracks (overdubbed) with his classic Epiphone guitar, in his uniquely interesting improvisational rethinking of Bach's "Well Tempered Clavier, Book One."

And what an different way to go about it! The contrapuntal lines are there or implied, but so are some really nifty guitar improvisations, some swing chord harmonizations, and any manner of other rather brilliant ways into, around and through Bach's wonderful music.

I think I should just say that it's a monument to Andy Fite and his musicianship. And it extends Bach in ways Bach would have dug, being a significant improviser himself. Do a Google search and you'll find places to order this one physically or digitally. But you probably shouldn't forget to do that if you are a guitar-type! Or even if you are not.
Posted by Grego Applegate Edwards at 6:04 AM