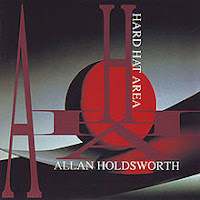 Allan Holdsworth over the course of his dozen or so studio albums has established himself as a guitarist with a style so distinctive, so musical and a sound so inimitable that he is in a category of one: guitarists who sound exactly like (because they are) Allan Holdsworth.

His eighth album, Hard Hat Area (MoonJune 044) in a welcome reissue, gives a great example of how that is so. In Barry Cleveland's excellent liner notes, he emphasizes that this recording was the product of a working band, and so has a kind of cohesiveness and interactive ESP some of the others do not always have.

It's Allan on guitar and synthaxe along with Steve Hunt at the keys, Skuli Sverrisson on electric bass, and Gary Husband on drums. They tackle seven substantial Holdsworth compositions that have an almost orchestral dimension thanks to the fullness of the arrangements, the synthesized harmonies and the richness of the players' approach.

All the elements are in place and when Allan gives out with his inimitable solo work, it is an integral part of the musical matrix in the same way a concerto for violin and orchestra might be. It's much more than an exercise of Allan's formidable technique and beautiful harmonic sense and tone, though it certainly is that. It's music. Very good music indeed.

One of his very best. Great to have it available again.

Posted by Grego Applegate Edwards at 4:35 AM