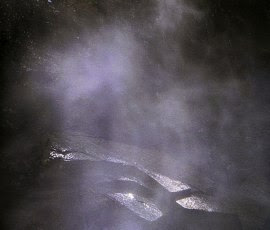 This blog site, for those who don't know, covers a wide spectrum of things, some not typically of concern to a chops-axe-gearhead thing. All kinds of music is covered and some of it doesn't even especially center on guitar or bass, but instead might give you something that a musical mind would find interested and something to grow on in general. So be prepared for music of all sorts, rock, jazz, avant, songmeisters, even new age if it's something I can stand!

With that in mind I present to you today an Artist Promotional CD-R in the JaZt Tapes series, one of a number by musician-bandleader-avant-jazz-artist Jeffrey Hayden Shurdut, a live date from a pretty obscure club in New York, vintage 2007. It's a trio of Daniel Carter on trumpet, flute and tenor sax, Brian Osbourne on drums, and Jeffrey on electric guitar. This is free music, a totally improvised set of music where there is no set pulse, no set melodies, nothing harmonically prescribed, and no set routines that I can detect--and that's not unusual with Jeffrey but rather 99% the case.

Daniel Carter gets lots of space to get a solo stream of notes flowing (especially on tenor, which he is most known for) and he does that well, as one can rely upon him to do. Osbourne gets a counter flow of open-time drumming that forms an effective carpeting to Carter. Shurdut, who is more usually heard (literally so) on piano and sometimes reeds, provides sound color on the guitar in sparing ways. At times you may not hear him much if at all. It's the opposite of what a guitarist who wants to establish him or herself as an important player would do. It is utterly selfless. He is nearly invisible. But then Shurdut is a person who brings good players together and gets them to do great work, as I've noted today on a review of another of his CD-Rs on Gapplegate Music Review (see link to that site in top left-hand column).

And that's what's happening here. As a massive thunderstorm approaches as I write, I know I'd better get this posted now. It's good music but it's not something where the guitar stands out!