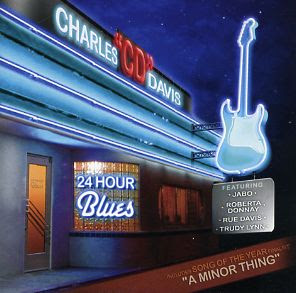 The blues goes on. For a while there were folks doing things, and they are still out there, mostly, that had a big blues influence, that were tauted as the new blues sensations. Truthfully, it didn't always hit me as "the blues." Soul, yeah, other things, yeah, but maybe not exactly the blues. And that's cool. Well, OK and there have been some cats there clearly in the blues tradition, doing something right now. Along with the surviving cats (RIP Bobby Bland) who still are very much doing it. I've been covering them here and on the Gapplegate Music Blog. Here's another good one.

I speak of Charles "CD" Davis, with a cranking band, and his CD 24 Hour Blues (Blues House 0300). Charles plays a sizzling blues guitar. He was doing it for years with the Calvin Owens Blues Orchestra. Calvin passed in 2008 and Charles decided to hit out on his own. This is his debut.

Charles holds forth on the guitar and puts in an excellent showing. His axe is joined by four good vocalists here: Jabo, Roberta Donnay, Rue Davis and Trudy Lynn. They all have something going. The tunes are a mix of classics and classic-sounding new things or not-so-known things. It's modern urban soul blues with blazing guitar and it plays real nicely, man, no matter where or when you are. That's what it's about.