Song of the South, Duane Allman & the Rise of the Allman Brothers Band, DVD 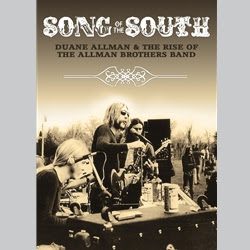 As the title makes pretty obvious the organizing theme of the bio-video is the importance and situation of Duane and the Allmans as part of the Southern US and how they energized the rock scene there. The Florida setting for the early musical lives of Duane and Greg gets plenty of attention. The racial segregation, the beautiful southern soul music and blues music coming out of the South, Duane and Greg's fascination with the music and rejection of the politics--all certainly help situate the coming-to-be of their musical consciousness and the social underpinnings implied.

The evolution of Duane and Greg's first bands from average local cover affairs to a more distinctive, harder outfit, the move to LA and the unfortunate two-album psych-pop Hourglass project, Duane's Muscle Shoals studio days and the key step--an Allman Brothers band finally giving fully fleshed impetus to the sounds Duane and Greg absorbed and gave back transformed, all is given due attention. I learned much from the DVD on the early days I did not know. And it's portrayed vividly with first-hand narrative and well paced sequences.

Then as expected we get a detailed account of how the Allman Brothers band started out, the unusual influences and combinations that came to bear on their music, and the initial struggle for recognition both in the South and nationwide. Of course the rest most of us know--breakthrough, the Fillmore album and success. As we know Duane bursts into guitar brilliance and the band establishes a style that wasn't quite like anything before. Then, tragedy. All is given moving and fascinating coverage, some of the best coming out of the interview footage with the Allman's road manager and engineers from some of the original sessions in Florida.

By framing it all as the story of the rise of Southern Rock, we gain much insight into the musical- and political-politics of the nation in that era, and how dramatic it was that the Allmans came to be--a band that was hip, socially-racially unbiased, helping to create and sustain a collective new Southern audience that rejected the good-old-boy, Jim Crow view of some of their forebears and contemporaries.

On the other hand there is a strictly musical aspect of the Allmans that doesn't get enough attention to my mind. That is the importance of the style of music the classic Allman band produced--at once bluesy, progressive and seminally proto-jamband-like with that so distinctive two-guitar sound and two-drummer rock thrust. There could have been a more musically informed discussion on a more specific level, though there is good general attention to Duane as a guitarist and his development. I'd like to know more about Duane's direct influence on the band's style--and I suppose there would need to be somebody from the band in those days to discuss that. But perhaps DVDs of this sort are not meant to be the last word on the music, and so this one most certainly isn't. For that there are books, and your listening ears.

Nonetheless it gives you a very informative overview of the Duane/Allman's advent. I was fascinated and if you want to know more about Duane and the Allman's history, I think you will be too.

Posted by Grego Applegate Edwards at 7:57 AM