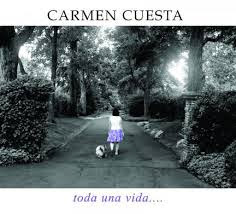 The musical category of "Latin" has a potential vastness. It encompasses so much as to be almost a conundrum. Yet it has validity in the world of divisions and markets. So today we have something in a Latin jazz, Latin vocal realm. Something good.

Singer Carmen Cuesta, a native of Spain, has been thriving doing Brazilian classic bossa. In her new one she turns a bit, doing a Spanish-language-oriented series of songs Latin, some with a pronounced bolero flavor. The album is called toda una vida... (Tweety Records 0004).

The music is an eclectic mix that works well thanks to the real artistry of Ms. Cuesta's sensuous and musically astute vocals. Guitarist Chuck Loeb co-produced the album with Carmen and Paco Ortega. He is responsible for the nicely done arrangements and adds his acoustic and electric guitar throughout, sometimes to stunning effect. You will most certainly recognize some Latin standards here and others maybe won't be familiar, but they all have a special stamp of very personal vocal stylings and nice arrangements.

It's all pretty jazzy and done with perfect taste and imagination.

Carmen Cuesta is a phenomenon. Chuck Loeb gives her a near perfect backdrop.