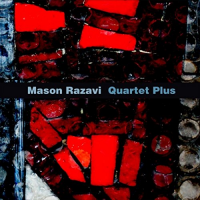 Guitarist, composer, arranger Mason Razavi has it all going. He is a player of the guitar of great finesse and taste, not to mention solid technique. He plays a semi-hollow with minimal amplification at times, getting an almost classical tone but not precisely; other times he ups the volume a tad for that equally classic mainstream jazz sound. Either way he plays rather wonderfully well.

Then he writes some fine tunes and arranges them with excellent sensibilities.

You get all this on his album Quartet Plus (First Orbit Sounds 222). The title puts it to you: you get half the album with his lively quartet; the other half adds five horns for a bigger sound. The quartet includes some very nice playing from Bennett Roth-Newell on piano and keys, Dan Robbins on upright and electric bass, and Cody Rhodes on drums. These are very capable associates who negotiate the compositional nuances of the Razavi originals, swing and funk along as one would hope for, and solo when called upon with style and skill. Listen to Dan Robbins for example on "From Thoughts to Words" and you'll hear some excellent bass work.

Then the larger band pieces come through with great part writing and a flourish.

Most of all there is the showcase of Razavi as guitar enchanter, a player who picks his notes wisely and comes through with the classicism of Benson, Burrell, maybe Hall, a subtle way but soulful too when he chooses and the music fits it. There's a little boppishness and lots of postbop.

It's a fine album on every count. Mason Razavi is serious! Seriously good. Seriously talented.