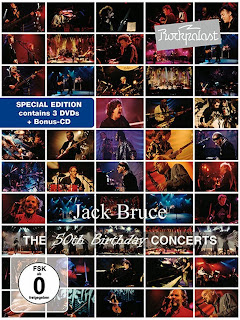 The loss of Jack Bruce this past year was huge. He contributed so importantly in all the genres he touched that his legacy is assured. Jack Bruce the electric bassist, the inimitable vocalist, the songwriter, the style innovator in hard rock/blues rock, in electric jazz, art song, it goes on.

Some if not most of that is nicely captured in the release of the live German broadcasts of The 50th Birthday Concerts (MIG 90610). It is available as a two-DVD box set, a 3-DVD & bonus CD set, or two DVDs and a CD in "digi-format." I watched the two-DVD version.

It covers much ground and was culled from several live Rockpalast concerts that took place in Cologne in November of 1993. Jack was in fine form throughout.

We get a tantalizing bit of his cello playing, some songs with Jack singing and playing piano, joined by Gary Husband on keys and then drums. Then saxophonist Dick Heckstall-Smith and the legendary Ginger Baker on drums join Jack for some progressive jazz, surely a good thing to hear. From there it goes on to a shifting array of electric musicians and horns for a nice selection of songs Jack did with Cream and later solo efforts. Bernie Worrell, Gary Moore, Baker and many others lend a good deal to the lively music. Drummer Simon Phillips is not to be missed, either!

Another surprise is the two cello and guitar renditions of "As You Said" and "Rope Ladder to the Moon."

But it all is worthwhile, well recorded and a real tribute to Jack and his artistry. His bass playing is beautiful, his vocals wonderful, the songs sound as great as ever and everybody seems stoked. The Cream reunion of 2005 might have stolen some of the thunder from these concerts, but Jack is more completely presented here in all his guises. As a live retrospective in 1993 we cannot do much better! It reminds us all-too-vividly of his absence now.

A real treat for all who love Jack Bruce. RIP.