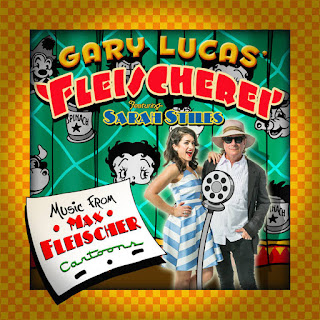 Like the irrepressibly creative guitarmaster-bandleader-conceptualist Gary Lucas, my most vivid early television memories involve the daily afternoon program devoted to the old Popeye cartoons. They spoke to me without fail, though having nothing very much to compare them with at the time I did not appreciate the inimitable pacing and surrealism they embodied. Around the same time I watched Betty Boop cartoons with glee, on another station, I believe the old Metromedia Channel 5, but who can be sure? In the end, much later, I came to understand how special these Max Fleischer cartoons were from an artistic point of view. But the immediacy and peculiarly hyper quality of them still hits me directly when I watch again so many years later.

Gary Lucas has been at the forefront of creating music that references and interacts with film, as anyone who follows his career knows. So when I heard that he had the idea of devoting a tribute album to the music on the Fleischer cartoons I was not surprised but also filled with anticipation.

The album is just out, Gary Lucas' Fleischerei and Music from Max Fleischer Cartoons (Cuneiform). Its birth was a somewhat complex affair, involving a convergence of Gary working out guitar arrangements on his old Gibson acoustic and Joe Fiedler working out through-arranged complements for the ensemble of himself on trombone, Jeff Lederer on winds, Michael Bates on bass, and Rob Garcia on drums. The key component to it all, the lynchpin, is provided by Sarah Stiles in her uncanny vocal personifications of Betty Boop and Olive Oyl.

There are twelve musical numbers represented on the album, including the complete music and dialog from the Popeye cartoon "Beware of Barnacle Bill."

The liners describe the madcap fusion of jungle jazz, broadway ditties, klezmer and Yiddish theater elements that went into the music from those cartoons, a microcosm of New York in the '30s but put together in incredibly zany and eccentric ways. It was a formative influence on my ears and I remember virtually all of the originals. I was just one of millions of kids (and adults) who entered this world and came away permanently changed. So what better than a Gary Lucas take on the music?

Like all projects of this sort the outcome could go either way. There was such a special quality about the originals. Could they be recreated? The answer is yes, emphatically, and in the doing the album is a furthering. Gary's guitar arrangements are stunning (listen to "Little Pal") in ways that only Gary can pull off, the band arrangements get to the hot jazz-Yiddish nexus with gusto and verve, and I'll be d'd if Sarah Stiles does not get to the essence of classic Boop and Oyl and somehow does it with real style and verve.

My partner, who grew up just like me (only halfway across the world) watching these cartoons, reacted just as I did from the first listen. "Now this is my kind of music," to quote her. I feel the same way. It is a heartfelt tribute, yes, yet it stands on its own as re-creative whole! A hoot! Beautiful!

OK, so you want to hear a sample? Here's a cut from the album courtesy of the label: https://soundcloud.com/cuneiformrecords/gary-lucas-fleischerei-the-broken-record-from-music-from-max-fleischers-cartoons My live link feature is on the fritz again so you will need to copy the link and paste it in your browser. Also check out a cool live video at https://vimeo.com/155776682

Posted by Grego Applegate Edwards at 7:32 AM