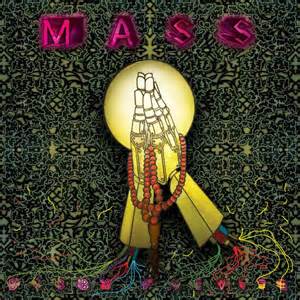 One cannot help but reflect while listening to drummer-composer Bobby Previte's Mass (Rare Noise 072) how far we have come from the Electric Prunes' setting of the Mass, composed and recorded at the beginning of an incipient flourishing of rock as art in the later '60s. It was at the time a sort of cutting-edge proclamation that rock was worthy of serious attention as a musical form. Those who were not alive at the time or otherwise did not explore the art rock camp may have no idea of all this. But regardless the Bobby Previte work recorded on Rare Noise is miles beyond those early beginnings.

At the basis for this Mass is Dufay's "Missa Sancti Jacobi," an acapella choral work from the Renaissance. It is sung nicely here by The Rose Ensemble. Overtop, in between and around that is a heavy metal-avant-psychedelic score performed  by Previte and a formidable cast of modern electricians that include Jamie Saft, Marco Benevento, Reed Mathis, Stephen O'Malley, and others on electric guitars, keys, bass, etc.

Amazing to hear is the contrast of power chording and the counterpoint of the Dufay, both working against each other in myriad ways to forge something wholly other.

Previte's drumming is as advanced in the "heavy" zone as you'll hear. But the full totality of advanced psychedelics, post-Messianesque organ musings and Renaissance choir, the sheer viscerality of torqued guitars against clear and fresh choir is really rather superb in its shocking together-in-apart profundity. Perhaps without Charles Ives and his first disparately contrasting collages of musical elements we might have never come to this. But here we are.

This is incredibly beautiful metal. It is a landmark! I wonder what the Electric Prunes might think of it? I think they would approve.

Highest reccomendations for this!