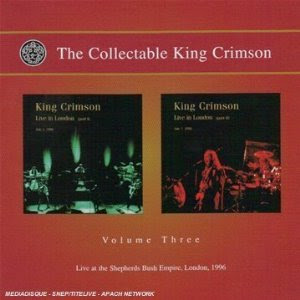 February 19, 2009—King Crimson has been a band that, during its active periods, never stands still. The music is always developing, while the personnel configurations give a particular character to the music at any given time. Fripp seems to find musicians that can contribute solidly and change the sound of the band from lineup to lineup. One of the more impressive configurations was the double trio: Fripp and Belew on guitars, Trey Gunn on touch guitar (see a recent entry on these pages for an interview with Trey and what he is up to now), Tony Levin on bass and stick, and drummer/percussionists Bill Bruford and Pat Mastelotto. That very group is wonderfully represented on a 2-CD reissue of a London concert in 1996, The Collected King Crimson, Volume Three: Live at the Shepherds Bush Empire (DGM). This is no stock run through of greatest hits. There’s an opening soundscape by Fripp, some great drum routines and a cross-spectrum of their repertoire, digging back as far as “21st Century Schizoid Man” through to the Talking Heads-like “Elephant Talk.”

There’s plenty of music and the band is in top form. This wasn’t a group that featured hours of guitar solos. The experimentation tends to be collective and the expansion of their recorded versions takes place in terms of drive and a modification of the arrangements. The set has great sound and reminds us all of what we missed back then if we didn’t go see them.
Posted by Grego Applegate Edwards at 6:09 AM