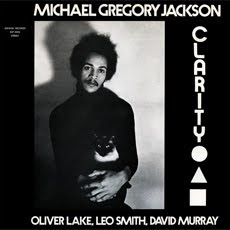 Michael Gregory Jackson, now known simply as Michael Gregory, made an album back in 1977 that established him as a rising star in the new jazz and improvisation world that had emerged full blown from the vital loft, non-traditional scene. The album, Clarity, had the makings of a classic and today, with the reissue of the album on ESP (3028), it can be said with no hesitation that it is among the most important and profound recordings of the era.

Well why, you ask? It framed Michael Gregory the guitarist, vocalist and composer in a very excellent light, both by himself and with the very best of the then emerging players of the movement, namely, Oliver Lake on reeds and miscellaneous percussion, David Murray on tenor, and Wadada Leo Smith, trumpet, fluegelhorn, etc.

What was (and continues to be) rare was Michael Gregory's combination of great lyricism and puckish chamber avant singularity. There are sharply memorable ensemble pieces of great fluency, there is a song (part of the title cut) for Michael's vocal instrument, accompanied by guitar (and it is unforgettable for its content and artistry) and there are some remarkable solo acoustic guitar moments. Finally, there are passages of free improvisation that show the considerable gifts of the musicians while still fitting perfectly with the lyrical quality throughout.

Jackson's mostly acoustic guitar style is in abundant evidence all through the album. You'll no doubt be captivated (like I was and still am) when he gives out with arpeggiated lines that show his totally gifted approach to the instrument, his unique way with picking out particular phrases that hang together as a coherent statement yet are beautifully different.

The album worked for me from the first hearing I gave it back then. It was most definitely one of the standout albums of the later part of the '70s. Listening today, I find that the music does not diminish in stature but in fact sounds even better and more original than it did back then. It's prime for Michael Gregory, his guitar and his music, it's prime for the really excellent sympathetic performances of his fellow improvisers, and its prime as an artistic statement of where the music can be (and of course is). This one gets my highest recommendation. Bravo to ESP for re-releasing it; bravo for Michael Gregory for making it!
Posted by Grego Applegate Edwards at 3:58 AM