Guitarist Gary Lucas & Gods and Monsters, The Ordeal of Civility 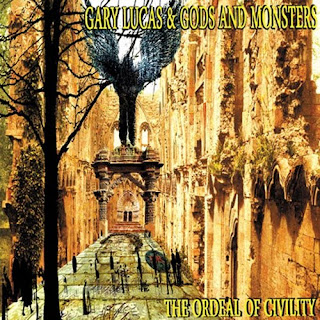 In the musical world there are artisans and there are artists. The pure artisan has phenomenal technique but does not harness that technique much to make music that is more than a fireworks display of finger, hand, lip, tongue or vocal-chord twisting exercises designed to wow. The artist on the other hand puts music at the center of the picture, but may not be technically advanced. Gary Lucas manages to be a superior artisan AND an artist of first rank.

This is well-shown in his new album with his band Gods and Monsters, The Ordeal of Civility (Knitting Factory Records 1111). He is joined by a very solid grouping of bass, drums, sax, and trombone-keyboards. The Talking Head's Jerry Harrison produced the album. He gets a tightly staged rock production that fits the overall arch of the music. That is, the music is centered on the song form.

The Ordeal of Civility title is taken from a book by the same name, Cuddihy's 1974 opus looking at the Jewish triumvirate Marx, Freud and Levi-Strauss and their profound impact on the Gentile world. At least, that's what the liner notes tell us. I have not have the pleasure of reading the book myself. (But the originals I have read of deeply. Graduate school, OK? They HAVE profoundly shaped the way we think. Trust me on that if you have not delved much into their work.)

Anyway this is rock band-original song material, which is what Gods and Monsters is about. Gary's songs have rock universality on the veneered surface. But then get inside them and they begin to become singular. They breathe, expand, contract, give you pause and play themselves in your head at night. They go from the very catchy opening "Luvsoldsweetsong," the psychedelic-folk Stones-reminisced "Lady of Shalott," to the hauntingly somber "Jedwabne," a song about an anti-semitic, genocidic pogram taking place in a European city years back and the remaining nightmare of its memory. This is moving music.

Gary sings in an effectively serviceable way--he can sound a little later Iggy Pop-like, a Bowie-ish semi-baritone; and then he can go elsewhere and get into his upper range with a different sound.

The brilliant guitar work is there, harnessed to the needs of the songs themselves. You'll hear Gary's blossomed acoustic work in all its finery and brilliance. And you'll hear some of the electric psychedelic tone balancing that helped put him among the ranks of the very best from the beginning of his solo career on.

The balance of song, style, content and musical prowess brings a high level of elements together in equal proportions. This is music to dwell in, reflect upon, and get down with too.

It shows that Gary Lucas remains vital, whatever direction he seeks to move within and towards.

So don't hesitate.
Posted by Grego Applegate Edwards at 5:21 AM