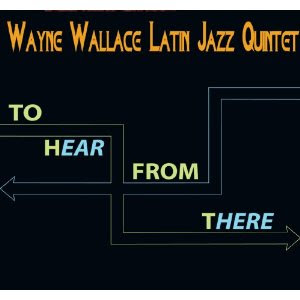 Latin music, from the mambo, son and salsa days onward, has favored brass enclaves and soloists. The trumpet and trombone have special status in the Afro-Cuban music of the dance. Reciprocally and/or complementarily Latin jazz often puts pride of place it its brass players. After all Diz, a trumpet master, has much do with encouraging the form and innovating within it from the '40s on.

So when a trombonist, Wayne Wallace, puts together his Latin Jazz Quintet and features himself on bone as well as the recurring use of a four-man bone choir, it makes sense. That's what is going on in his To Hear From There (Patois 012). The core nucleus for this album is his quintet of self, Murray Low on piano, David Belove, electric bass, Michael Spiro, percussion, and Paul van Wageningen, drums. The three additional trombonists and a vocalist or two jump in from time to time.

What you get is grooving latin percussion and rhythmic Latin style riffs, nicely arranged lines, some standards and originals that fit together well, and hell of a lot of good Wayne Wallace trombone.

This is music that will catch the ear of the Latin Jazz enthusiast, and for entirely good reasons. If it doesn't quite have the drive and dynamism of an Eddie Palmieri, well it doesn't. Not many bands can equal Eddie's in its prime. And ultimately we are talking about a quintet at its base for the Wallace unit, so they don't have the larger band clout for the most part. For all that though if you come for the trombone you will be very happy.
Posted by Grego Applegate Edwards at 4:29 AM