David Maranha and Gabriel Ferrandini, "A Fonte de Aretusa", A Freeform Duet for Organ and Drums 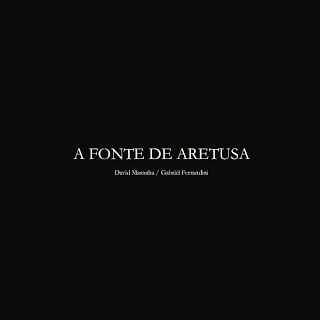 Based in Lisbon, Portugal, hammond organist David Maranha and drummer Gabriel Ferrandini have something to say, judging from the live vinyl LP release A Fonte de Aretusa (Mazagran MZ002).

It's 40-some-odd continuous minutes of the duo droning, psychedelisizing and freely traversing a quietly dense soundscape that resembles an expanded explosion of what Mike Ratledge and Robert Wyatt might have done in an early Soft Machine performance. It has that sort of rhythmically open, interestingly distorted organ tone and flippy pulseless drumming that was known to come about for a minute or two in the course of a long jam by the Softs.

Of course there's a bit more to it than that. There is staying power generated betweeen the two. It goes in various directions, creates variations on the variations of the deceptively static overall sound, and never gets boring.

I find myself drawn to this one for reasons that do not have a cognitive logic. It's well mapped spontaneity on a trip without a literal map, a sonic journey that thrives from its simple premises.

Not everyone will be drawn to this one. But I think if you have read the description you will know if it is going to be you. . . or not. Play on players, dream on dreamers.
Posted by Grego Applegate Edwards at 6:05 AM