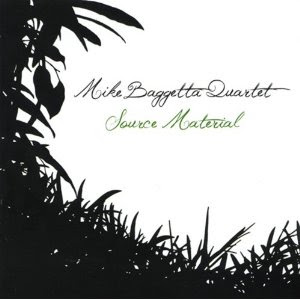 Mike Baggetta returns with Source Material (Fresh Sound). He brings in a very copacetic quartet of himself on electric guitar, Jason Rigby, tenor sax, Eivind Opsvik on the upright, and George Schuller on drums. It's a working band, and they show it with the kind of interlocking understanding such a situation makes possible.

Here we have an all-originals date. Baggetta assembles a very interesting set of his compositions that go well with the artists at hand. It's an often pretty lyrical, post-ECM sort of music, with space for some excellent rapport, the harmonic and single note thoughts of Mike, the very together tenor sound and solo pointedness of Jason, plus Eivind and George doing very sensitive work fleshing it out and getting things in motion.

Mike is developing his style from a contemporary, harmonically rich and notefully striking base. The facility, imagination and taste is there and he draws on the Jim Hall-and-beyond guitar innovators as he builds his own personal foundation. He can get very contemporary-chromatic, which he does especially well on "Momentum" as George and Eivind kick up a swingtime storm. Jason gets somewhere from where we are too, with a solidly built contemporary edifice of his own.

It's a total package at this point--pieces, improvisations and group distinctiveness. Mike is a guy to watch in the coming years, and even now!
Posted by Grego Applegate Edwards at 5:02 AM