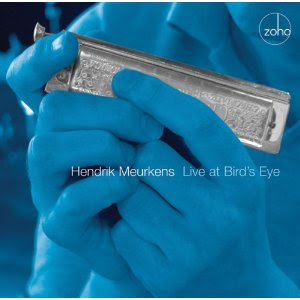 Vibist and harmonica adept Hendrik Meurkens fronts an able quartet in a set of lively samba jazz on Live at Bird's Eye (Zoho 201114). Misha Tsiganov does a fine job with a kind of hard bop/Tynerish modern samba feel and turns in nice solo work. The rhythm team of Gustavo Amarante (bass) and Adriano Santos (drums) does the push-pull swing of jazz samba well and keeps the fires burning, as it were.

Hendrik plays a well burnished chromatic harmonica with real jazz phrasing, good solo ideas and a terrific tone. His vibe work is a fine example of mainstream playing in the samba zone. There are Brazilian standards, songbook standards done with the samba swing and a couple of good Meurkens originals.

It's all very good and worthwhile. Now if they could nab a first-tier firey tenor of the Joe Farrell caliber and/or a trumpetiste of the Woody Shaw brassiness school they would kick it up a notch into near-nirvana I suspect.

But they have plenty of good things going as it is.
Posted by Grego Applegate Edwards at 5:18 AM