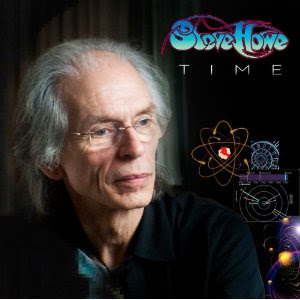 It was only a matter of time before new age music faced a challenge from more substantial, less vapid musical fare. Light classical has always been an alternative, as was at one point the classic "Pops" concerts by such institutions as the Boston Pops Orchestra. It was inevitable that Boomers and their underlings got jangled nerves and sought the peace of oblivion with armchair music to sooth the post-industrial workaday or lose-the-job, savings and home life-scenarios.

Enter Steve Howe, venerable institution of prog as longtime Yes guitarist. He's always had good taste and a musical sense of what to play when. Team him up with film composer Paul K. Joyce and get together some classical melodies everyone knows, some originals of mellow transport, lushly orchestrate them for real and virtual orchestral ensembles, and you have the rebirth of Pops.

That in essence is what Steve Howe's new solo album Time (Warner Classics 2564665341) is about. It gives you Villa-Lobo's theme from the "Bacchianas Brasileiras No. 5," lushly re-orchestrated and set up for Steve'e cosmic slide electric to take the place of the soprano, or a well-known theme from Bach's Cantata No. 140, a Vivaldi Concerto Grosso theme, then originals by Howe and or Jacobs, or for a couple, one Paul Sutin and one Virgil Howe. Steve goes from very electric pedal steel to classical acoustic to banjo and 12-string electric. His artistry is on display in a good light. He's never been about lots of chops and he doesn't do that a great deal here, but he gets the nice declamatory tone and fronts the Pops movie soundtrack for your mind in ways that do him credit.

It's all quite nice. Some of the contemporary originals sound an awful lot like movie music in search of a movie. It's too substantial to be new age, another one like that, but it mostly chimes in as very pretty, very mellow, but rather thematically undistinguished music for the original contemporary pieces; the other part will no doubt appeal to many--namely the mellowing of the classics.

I would personally feel more comfortable had there been a little more of the edge that Howe we all know can do. But then part of the sales factor here is as a new easy listening pops thing. So for that, it is excellently done. Classics it's not so much as it might be. Still, a nice listen.
Posted by Grego Applegate Edwards at 4:30 AM