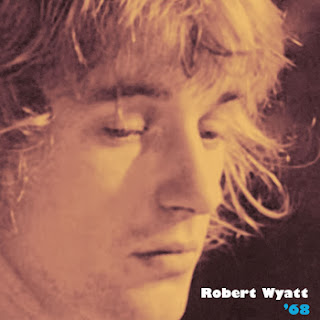 Drummer-singer-songwriter for the original Soft Machine lineup, Robert Wyatt had much to do with shaping the sound of that band in its early days. His whimsical songwriting style, faux casual vocal delivery and busy progressive drumming stamped the band as a world apart. Of course Mike Ratledge on keys gave the band something critical too, but then his influence stayed with the group throughout its first quasi-psychedelic period and through most of its later jazz-rock incarnation.

That first period was something in its own right. The Softs carved a distinct niche as a proto-progressive rock art band that sounded like nothing before. At the peak of the band's initial exposure (after touring with Hendrix) Robert Wyatt recorded some sides in a New York studio, then more in California. Only half of it ever saw the light of day. But now the whole is out and you can hear it as '68 (Cuneiform). There's a limited edition LP and a CD version as well. And it is most welcome for its own special qualities and the light it sheds on the period.

Wyatt comes through with a set of often quirky unpredictable numbers, playing many of the instruments himself (though Hendrix is on bass for one, and sometimes the keys sound uncannily like Ratledge) and giving us quite a bit more of the songwriting he was doing with the Softs. There is even a first version of "Moon in June", that iconic Wyatt song that formed a side later on when the Softs reformed and recorded the double-album Third. Here it has its own trajectory--not better than the Soft version, but interesting in its own way.

If you love Wyatt and the early Soft Machine's approach, this will most certainly be a revelation. Not everything here is a masterpiece--some is a little silly, but only a little bit of it. The rest you won't want to miss.

It's probably the reissue/unissue of the year for me. So give it an earful, please.