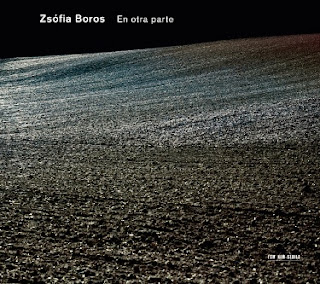 Zsófia Boros exudes an extra-worldly beauty when she plays the classical guitar. This I discovered to my delight on auditioning her recent ECM debut En otra parte (ECM B0019042-02). It's her, her guitar, that marvelous ECM sound and a great selection of compositions that she has gotten inside of. Nothing else. But why would you need anything else?

I jump ahead and you have not heard the CD yet. Let me describe it a bit more. She is Hungarian, but she has mastered the Spanish-American idiom with a real flair. The compositions are principally from the Americas and they are well-chosen to evoke nuances and shades of sound color that she brings out in excellent fashion. But to be more specific there is a good deal of music by Cuban classic-modernist Leo Brouwer, and they are something to hear. There is a fine work by the Spaniard Calleja, another by Amigo, something very beautiful by the Brazilian Dilermando Reis, then there are intriguing works by Argentianians Sinesi, Miller, and Fleury, and, yes, very fittingly given the provenance of this recording, Ralph Towner.

As my press sheet eloquently puts it, the composers represented generally have been "wanderers between worlds, musically, philosophically and geographically." And so Boros wishes to address what the title of the album suggests, which comes from Roberto Jarroz’s “Todo comienza en otra parte” (“Everything begins somewhere else”). Now that's pretty darned profound to me, even though as I write this it is a Monday morning to a week I might prefer be deferred to some other indefinite time. Our music world today is redolent with this and Boros nails down something critical there. We begin in one place in whatever sense. Where we end, today more than ever, will inevitably be another.

Now all that is fine and dandy but would mean less if it weren't for the extraordinary nature of Boros and her artistry, and the rather clear path the compositions have taken into her inner being. She breathes these works, literally brings them to life with such care and devotion, such a marvelous touch, that you totally believe with her that THIS is the music she should be playing right now, and that THIS is what we should be listening to, wherever we are and wherever we came from to the here we are inside of, come what may.