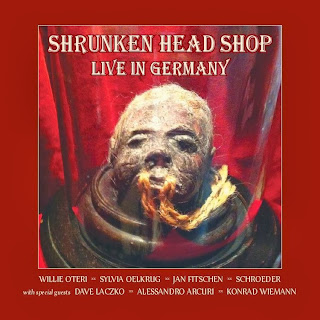 If there's justice in the music world (and there is) much of it has something to do with talent getting heard...eventually. Here it is December, for example, and a recording I received at the beginning of September is finally finding its way to review here. It's not that I didn't appreciate it on first hearing. I did. But this final quarter I have literally been bombarded with music. Sometimes just to get through them the first time becomes a chore. And then my life--as chaotic as side one of Ascension lately. No excuses, though.

So let's press on. We are talking about guitarist Willie Oteri and the band Shrunken Head Shop--and their album Live in Germany (Oteri Tunes). It's good. It was recorded during their tour of Europe in 2012. Willie was a big part of WD-41. Now he finds a kind of out post-Bitches' Brew groove but without a lot of emphasis on groove--with a bit more in the way of a very loose but very appealing kind of tapestry of sound. Dave Laczko of WD-41 is back on trumpet and he plays a integral part of the proceedings. Then there are some hip German and Italian musicians in the band, including Sylvia Oelkrug, violin, Schroeder, drums, Jan Fitschen, bass and stick, Alex Arcuri, electric bass and Konrad Wiemann, percussion.

What grabs me about this is how well the collective freedom is used by all to get a spacey exploration going while consistently keeping it filled with good spontaneous events. Willie's playing is excellent throughout and trumpet and violin interact particularly well with guitar. Then when the basses get it going that's a good thing as well. But everybody is on the mark here.

If you are into post-prog electric freedom and are ready for something different in that zone, this is most definitely ear-candy for your listening mind.