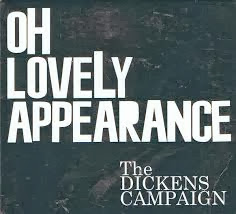 Who are the Dickens Campaign and why that name? Dickens...as in Deric Dickens, drummer, composer, bandleader. Their first album, Oh Lovely Appearance (Mole Tree Music 003), finally has made its way to the top of my review pile, and I am glad for it, because it's a different sort of sound. Deric on drums, Kirk Knuffke on cornet and Jesse Lewis on electric guitar.

The music can be compositional, free-flowing open-air spatial, or it can get a bit of a rock edge especially with Jesse's fine guitar work. There are things that look to an earlier time while looking ahead, and there are things that just sound like these three when they get together. Kirk plays some terrific cornet throughout, clean or brassy, a real phraser. He writes some game tunes here also (as does Dickens).

There is an inextricability to this--like Giuffre's threesomes with Jim Hall (RIP, Jim), there's no taking away any of them. It's a three-way sound that has been fashioned with some care and each has a vital role to play.

There is something old, classic in its newness, especially coming out of Kirk. That doesn't mean he is in any way old-school, but the sound is classic.

This one is a definite score. Listen a few times and you'll get something you can't really find elsewhere.