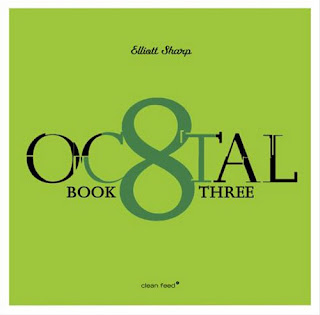 Those in the know do not need to be told about the importance of Elliott Sharp for composed and improvised avant music. His influence is pervasive and he remains an important source of innovative original music, as he has been for many decades. His guitar playing is unparalleled, his compositions occupy worlds of their own, and even his reed playing has much to recommend it.

Today we get Elliott Sharp the solo guitarist, or rather the player of the eight-string electric guitar-bass. We have the third volume at hand of his solo series for the instrument, Octal Book Three (Clean Feed CFG008CD).

There are in all 11 episodes/aural events born of solo instrument and live effects, most especially the digital delay but other devices as well, in combination with harmonics and extended techniques as well as a generally abstracted, sometimes highly motored approach.

It is instructive to compare this music with the David Torn album I reviewed here a few weeks ago. Both start with the premise of a solo instrument and its transformations electronically. But whereas Torn creates a more directly rock inflected sonic soundscape, Elliott deals in combinations of sounds and tones that when subjected to delay repetition have a more exotically percussive edge and a noise/sound color quality that give the strings a less typically melodically oriented feel. Innovative, sonically moving results are continually at hand. There is more to it than just that and both the Torn and Sharp odysseys are seminal each in their own ways.

But at any rate the sounds Sharp produces and repeats are very much more avant yet somehow earthen or even tribal at points. There can be driving rhythms that get you moving in the most appealing sorts of ways. Then there are sound sequences energetically outside too, but in a way often more dense and electric than, say, Derek Bailey in a typical performance.

The knowing in the end is in the hearing. "Book Three" is to me enormously satisfying. Anyone interested in the electric guitar(bass) and its modern extensions into new forms of artistry should hear this one, without a doubt. Viva Elliott Sharp!