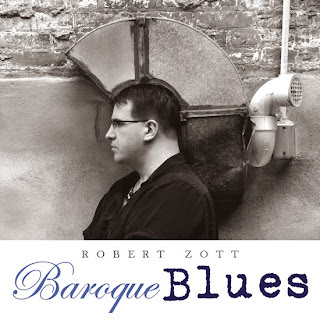 There are DIY recordings out there in the multitudes. What it means in the positive sense is that some worthy artists get to put together some music for us that we might not otherwise have the chance to hear.

Robert Zott, guitarist, songwriter, vocalist and multi-instrumentalist gives us something of that sort on his EP Baroque Blues, Vol 1 (self-released). This is underground music that has a quirkiness that takes a listen or two to get acclimated.

It is musically quite competent but not about virtuoso chop-licking. Rather it is an intimate alternative-out series of songs with sonic extras, electronics, solid fundamental rock and blues roots, but taken to different places.

The strength lies in the convincing songs and their presentation. It is a kind of chamber rock more so than a blow-up-the-amps hard attack. And that is cool once you adjust your expectations.

Normal it ain't. And in the end, I found myself saying, "yeah, not what I would expect but it works!" If you want a break from the usual and still believe in the rock song thing you will find something to appreciate here. Beefheart meets Pearls Before Swine? No. Not exactly. But that might give you a very rough approximation?