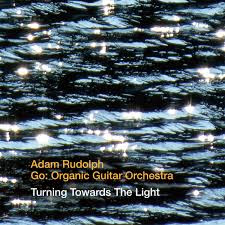 Getting this album and seeing who was on it immediately filled me with expectations. Adam Rudolf Go: Organic Guitar Orchestra? Yes. The album at hand is called Turn Towards the Light (Cuneiform Rune 406). It turns out this is the ninth album by Rudolph and his extended guitar outfit, but this album is an all-new grouping, with 13 compositions by Rudolph that he "improvisationally" conducts. It is a stellar line-up consisting of:

That was enough to get my interest! And here there were nine previous albums, and every single one I have missed. Not entirely surprising, since I only know lately what is sent me and so I do not cover and hear EVERYTHING, even if I could. So I put the music on and found myself in a sort of jazz-rock guitar heaven.

These are thick walls of guitar improvisations and structural spontaneity around good compositional ideas and content Adam Rudolph thought out. It is music structured, often outside in overall effect, freely unfolding according to the given foundation of each number.

These are all PLAYERS of course, so they do indeed GO forward and make something fascinating out of what Rudolph sets them out to do. It is very electric music in result, not so much insistent in a rock way--there is no pounding pulse that ordinarily accompanies fused and psychedelic song-structured music. This IS motif and riff-based often enough. And there is pulse much of the time, but no pounding per se. You could say it is an electric version of Fripp's League of Crafty Guitarists, except it isn't. In common with that group though are composed parts for multiple guitarists, yet mostly this is more free and out-rockish in result.

What it is--a virtual cornucopia of modern jazz-rock electricity--does not translate into an easily described thing. It is a guitar ORCHESTRA, and so it does have multiple layers of structured and improvised segments that come together to give us 13 stringed universes, all contrasting within a general stylistic originality.

It is music to stimulate and excite the guitar lover in you. And in the process it presents composed-improvised music that innovates by letting the flow of parts and guitar excellence come at us, segment by segment. It is serious. It is great fun. I would suggest you hear it by all means.