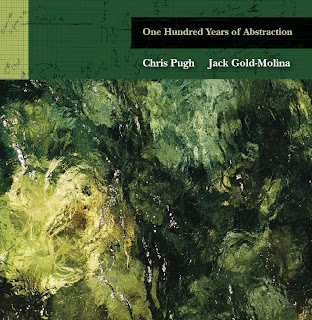 Seattle scene-makers Chris Pugh and Jack Gold-Molina give us an extended foray in what one could call free psychedelic jazz-rock on the 2010 One Hundred Years of Abstraction (SolDisk 0610). It's Pugh on electric guitar, Gold-Molina on drums and percussion. The guitar playing has a strongly psychedelic outness to it, with high-voltage crank, sustain and feedback an integral part of the presentation. Jack Gold-Molina's part is ultra-tumultous post-DeJohnettian free tumble, with intervals of relative restfulness in-between.

The music works best when Pugh concentrates on compositional phrase repetition, long tones and skronk. He occasionally reverts to rather standard rock phrases and is less effective in those moments. Jack turns in some excellent bombasted bombardment on drums. At many points in the long jams he is the focal point of interest and Pugh a weaver of accompanying figure work, almost as a sarod, sitar or sarangi might accompany a tabla solo in a classical Indian recital.

When taken on those terms it's a vibrant journey on a rocket trip to places far off. I dug that and kudos to it.
Posted by Grego Applegate Edwards at 4:51 AM