Dawn of the Dead: The Grateful Dead and the Rise of the San Francisco Underground 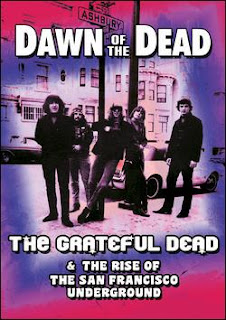 Anyone with an interest in the psychedelic San Francisco of the later '60s and/or the Dead will find the two-hours-plus DVD documentary The Dawn of the Dead (Sexy Intellectual 569) an excellent go. It covers via contemporary footage and a bevy of talking heads all the salient aspects of the story. Bluegrass, blues, rock and avant origins, Kesey's Merry Pranksters, fellow travelers the Charlatans, Airplane, Quicksilver, Big Brother, the Fish, the Haight Ashbury scene, and the evolution of the Dead from a cover band to the premier psycho-jam band of the age.

There are insights into the early albums, the stylistic evolution and recording practices, the partial origins of the band's style in the Acid Test gatherings, where they were welcome to develop a loose freedom without the scrutiny of a crowd demanding pop hits, the disaster of Altamont in 1969 and a general turning away from the electric onslaught to a temporary acoustic orientation. The story of the band parallels the story of the counter-culture of the times and the film does a decent job tieing that together.

Good footage, intelligent interviews and a cohesive narrative makes this one of the better in-depth documentaries of the music of the era. Definitely catch it if you are into the history and origins of the Dead and the San Francisco Sound.
Posted by Grego Applegate Edwards at 5:25 AM