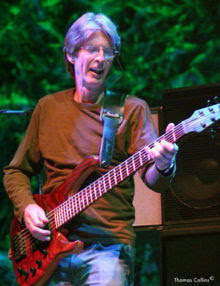 With the death of Jerry Garcia the Dead disbanded for a time but of course have since reformed in various guises. At the same time the individual band members formed units to tour and record. Today we look at a live show Phil Lesh and Friends did at the Warfield Theater, San Francisco, on April 16, 1999. Phil of course was and is the bassist for the Dead.

It was a nice night of jamming and familiar songs. Donna Jean Godchaux joins the band as guest on vocals. Otherwise it's Phil (bass and vocals) with an august company of Steve Kimock (guitar), Trey Anastasio (guitar, vocals), Page McConnell (grand piano & organ, vocals) and John Molo (drums). The combination of Phish members, Kimock, and Phil is a very good one and they get off to some nice long versions and quite decent jamming. . . three CDs worth. The sound is good and it does not disappoint.