A C Newman, Shut Down the Streets 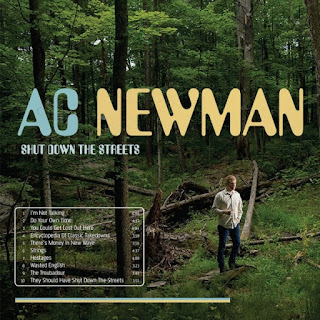 A C Newman writes songs that you remember once you hear them a few times, that come from some place inside his inner sanctum. His third album, Shut Down the Streets (Matador), combines some very nice songs with some haunting arrangements, floating sorts of things at times, but then they have movement too. Some nice guitar in there now and again as well.

It's music that wards off the depredations of a long winter, that looks ahead to spring, that's what hits me right now.

It's pop-rock-alt that doesn't assume you are stupid. I like that. Because we aren't stupid. The "Shut Down the Streets" song has a message too. So I like this guy.