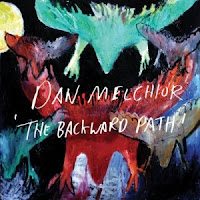 With Dan Melchior (and with Northern Spy releases in general) you can't just sit back and get something predictable and expected. So a new release generally is an event. So it seems to me anyway.

So Melchior's The Backward Path (Northern Spy 028) has that unpredictability. He has sidemen working with him, he does fritzy-folksy underground alt rock avant like he was born to it. And of course he was, right? We are all born to what we become in a large sense.

I stress the song with this music, because I was in music publishing for a while and the song is ingrained in my mind as the crucial starting point for music that has some relation to the marketplace, however tangential (and I imply approval there). The songs are songs and set the table for the sonic meal that follows. Melchior's new set is music of dream and daylight, simplicity-earthiness and complex-cosmogony.

It has that old school hippiness but with the "I've seen it, brother" contemporary world awareness. To give you a good feel for what I think, it's music I will listen to again with pleasure, even though the review might be long done.

He is an arteest of the alt. Melchior, Vile, Joanna Newsome, all good news for that, to my ears. So check this one!