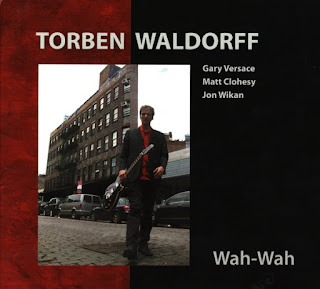 There is innovation. Then there is everything that follows. Some of it too is innovation. Guitarist Torben Waldorff is somewhere in that cycle. He plays guitar and writes songs in ways that make it clear that Metheny, Scofield and Abercrombie have each spent some time on his CD player or i-pod. But Waldorff is so good. He is so conversant in the musical language he speaks, there is such a something about him, that you hear him on his own terms.

I speak of his recent album, Wah-Wah (Artistshare 0117). I say recent even though at least one site published a review of it last November, I believe.

Point: if this is a good album then it's good in February or November. And it's good. Torben is joined by Gary Versace on piano and Hammond, and that's very good because Mr. Versace is ace.

This is memorable music--compositionally and improvisationally. And for that reason I would recommend it. There is good harmonic sequence, there are nice lines, and a sound that has some sheen but some grit, too. Mr. Waldorff is on his way to his own guitar style. He'll get there. In the interim we have this excellent disk to savor.

Posted by Grego Applegate Edwards at 7:51 AM