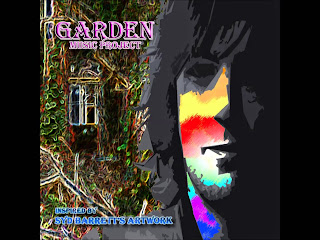 Today, something else retro-futuristic. Syd Barrett of course was the critical guiding muse behind the original Pink Floyd sound. When he left the band nothing was quite the same, yet he still inspired the direction they ultimately took, as he inspired the avant psychedelic rock that came after. He remains a vital influence today in progressive circles.

Adriana Rubio took 12 artworks done by Syd in his lifetime. She got a good idea of writing music that took some of the essence of those visual creations. She came up with 12 songs for the 12 works. She enlisted four together musicians to realize those sounds. We have the results today in the Garden Music Project (A R Garden ARG01).

This is music that of course is very informed by Syd's psychedelic rock music yet does not imitate as much as goes into a similar retro-futurist space.

So it's a rock quartet with guitar, keys, bass (doubling on sax) and drums, plus vocals and arranged extras. The music rings true as a well-put-together new trip into the psychedelic renaissance. It's certainly a parallel to the classic works but something new in the style.

If you don't expect a literal Pink Floyd-Barrett rehash you will approach this new music on its own terms. And I venture to say you won't be disappointed! It's good.