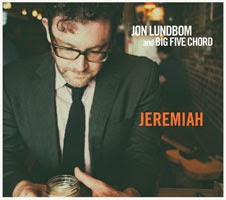 Now that all the hooting and hollering about Blue is behind us, I trust we can get back to the music other than that one! MOPDTK of course is one outfit and Jon Lundbom and Big Five Chord is another. There are members that span both groups, but the two have managed to maintain separate identities. Both have a sense of humor and both do some amazing music.

The Jon Lundbom aggregation have come through with a new one, Jeremiah (Hot Cup 142), that should remind us (the Catholic "we") that these cats still kick some exceptionally large butt. Or is it that they kick butt very swiftly and in a timely manner? Never mind the turn of phrase. You I am sure get me.

This album is another scorcher. Jon Lundbom supplies most of the compositional frames and they jump out at you. But he also is an exceptional electric guitarist who needs to be listened to. He has a jagged style that is out in a linear way but rhythmically outstanding as well. I won't say that he has the rhythmic sensibility of later Zappa, but both manage to play with time and against time in their own distinctive way. So his guitar wielding is something to hear.

The band is at its iconoclastic best again on this one. They have two guests who add to the mix in good ways. They are Justin Wood on alto and flute, Sam Kulik on trombone. So you get four horns for the compositional gathering and the guests solo well too.

Otherwise it's the potent combination of Lundbom, Jon Irabagon on soprano, Bryan Murray on tenor and baltosax, Moppa Elliot on bass, and Dan Monaghan on drums (and that snare!....sorry, a little allusion to some humor expressed by band members on social media in reference to my naming their last album as a "Record of the Year" last December).

If you don't think these guys can be funny listen to Bryan Murray's solo entrance on "The Bottle." Why it is funny I cannot put into words, but some of AEC's playing in their heyday was funny in inexpressible ways like that.

But the band is also dead serious of course. This is more of the gathering's remarkable music, evolutionarily modern, a superb outcropping of where things have been going in the realm of advanced "jazz."

That's a truth I feel and I am happy to express it. If this album sells--and of course I wish it does--it is nothing to do with controversy. It is for the excellence of the music. It's here to hear, so give it your ear.