Looking for Johnny, The Legend of Johnny Thunders, DVD Documentary 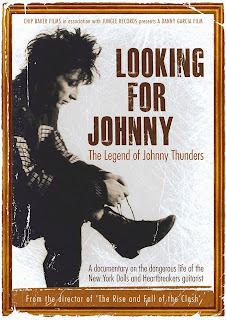 Who was Johnny Thunders? He was the legendary guitarist, singer, songwriter with the New York Dolls, the Heartbreakers, and as a solo artist who died in 1991 at the tender age of 36. The Danny Garcia docu-biography film Looking for Johnny is out on DVD (MVD Visual 6544D) and I watched it the other night with interest.

Johnny was in some ways a Keith Richards of the later generation of rockers. He wrote effective songs, played guitar in straightforward ways, and lived an image of the rocker-on-the-edge that was all too real. The film follows his life with extensive interview footage, including some of Johnny himself, concert/club video excerpts and a chronological narrative.

It tells the story of how he fit in with the New York Dolls and their emphasis on raw hard rock and a visual wallop, then follows him into the Heartbreaker days when the music continued in the raw and hard vein that was in the end intertwined with punk though in the musical sense it had a kinship but not an absolutely identical quality. And it goes on to his solo and on again, off again band offshoots.

It is a story of the tragedy of rock excess. By this period the image of the rock star and legitimation by self-destruction had carried over from the earlier jazz-Bird ethos and entered the electric music scene. Johnny got heavily into hard drugs and ultimately it contributed to his early death but also in part hindered any significant major success. He was and many in his band were so obviously strung out that they gained a reputation for unreliability which seems quite warranted. Beisides, a dangerous image was one thing but the rock world needed artists to produce on demand and Johnny was not always ready to put together a cohesive musical presentation when it was most needed.

His solo career is covered in some depth and on the musical side it revealed Johnny as a more versatile songwriter with a prolific ability to come up with some good tunes.

But mostly this is a story of a talent that gradually slid down the slope of self-destruction into an early oblivion. In that way he was the prototypical rocker of the era, a person who would rather destroy himself than grow old. The film describes that slide in detail, harrowingly I suppose you could say. The testimony of friends and associates, band members and rock industry magnates associated with his career, all of it contributes to a vivid picture of someone who simply could not stop, who was inside a fragile creature not really suited to the emotional and lifestyle extremes of the rock scene of the day.

It's very sad in the end. And pretty riveting throughout. Certainly a good and engrossing documentation of the New York scene and the burgeoning raw-rock revival. It explains his success, and it goes into the labyrinthian variables that the music business embodied in his day, how his dangerous image was both a way to sell him and also what kept him off the mainstream money-wagon for the most part. Fascinating.