Anthony Braxton Back to Basics, with Trio 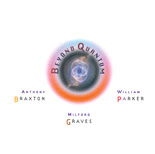 Since the later mid-sixties when Chicago AACM artists like Anthony Braxton, the Art Ensemble of Chicago and Richard Abrams burst upon the scene, the lineups and playing practices for the free-er sorts of jazz began to change radically. The number of unaccompanied solo albums by any sort of instrumentalist multiplied; the use of multi-instrumental lineups burgeoned, so that a sax player, say, might also be playing any number of percussion instruments; larger ensembles and even traditional quartets or quintets began to play not just head arrangements or free improvisations, but compositions where what was “written” or pre-planned could fall in and out at any point in a performance. Also, references to music outside the spectrum of acceptable jazz styles were more frequent and lengthy, with results that could be magical, or they could be a sort of failed experiment that formed part of the process. Either way, a healthy "anything goes" attitude was in the air.

Anthony Braxton was at the forefront of all these trends. He put out a double record of unaccompanied alto performances around 1967 that I can remember a traditional player waxing absolutely livid about in a Downbeat Blindfold test. Braxton was accused of not having any technique (although he most certainly did in his own way), dubbed “anti-jazz,” and dismissed as not even worthy of consideration. That traditional fellow was completely wrong, as time has shown.

Braxton was also a pioneer as a creator of unusual musical structures in his small groups; and he was known for his multi-instrumental barrages. And further he was central for large group compositions that innovated on a number of levels.

Mr. Braxton has remained a vital participant on the scene and seems to be in a particularly fertile period today. A recent release on Tzadik (Beyond Quantum) finds him in the company of an all-star free trio in a series of lucidly expressive improvisations. He is joined by two masters of the art: the incandescent bassist William Parker and the ever interesting drummer Milford Graves. Milford, you may recall, was a member of the 1964 Paul Bley group recording reviewed earlier this month. (How do you like that for longevity on a scene that is more than a little volatile?)

This is music that gives the lie to the idea that free improvisation is aimless, indulgent, or otherwise somehow anti-music. Each player operates within well-defined performance parameters, each contributes strongly with expressive music making that combines to create a vibrant and exciting group personality. Braxton in particular is in his finest form, phrasing and finessing his sound on each instrument in ways only achievable by someone playing and exploring as long as he has. It seems like he has risen to a new plane of creativity lately and this recording certainly shows it. I look forward to what he will be doing next.
Posted by Grego Applegate Edwards at 6:41 AM