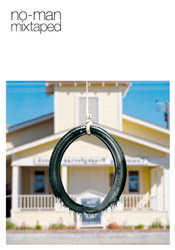 England’s No-Man has crept up on me and grabbed me. Their last album Schoolyard Ghosts (K-Scope) (which was their sixth) reviewed earlier on these pages, took me by surprise. The combination of art-quality songwriting by co-leaders vocalist Tim Bowness and guitarist-arranger Steve Wilson with a decided individual ensemble sound and ravishing vocals hit a high watermark for the best post-progressive music in the last several years.

Now they return in a two-DVD set Mixtaped (K-Scope). One disk is a 90-minute-plus concert captured at Bush Hall, London. The other disk puts together a kind of retrospective history of the group’s ups and downs, with very lucid interview footage by Bowman and Wilson and others associated with the band since their advent in 1990, as well as some choice videos covering each period.

The narrative disk forms an excellent way to understand what Bowness and Wilson endured before ultimately returning to their original sound, expanding and perfecting their craft and their style. The pressures of initial notoriety forced their music in a direction that they came to abandon in the last decade. The 85 minute narrative brings together a wide view of No-Man over time. You come away from it enriched and impressed with the articulate vision of the leaders.

As they themselves imply in the interview segments, the live tour and that Bush Hall date further the evolvement of No-Man to a new level of sublimity. They perform songs associated with various phases of their career. But with a working band for the first time in many years, there is a musical enrichment, a harder element, an immediacy to their music that combines the movingly introverted expression of loss and melancholy with a hard-edged power and a presentational dynamic that hits you in the gut, mesmerizes, enchants, haunts and exhilarates, all at the same time. Many of the versions done here are seemingly THE definitive ones, others are different enough that they make an impact far and above that of the typical live band set of greatest hits. The sound is fabulous and, in 5:1 surround, tactile in the best sense.

No-Man’s Mixtaped redefines prog rock and transcends it simultaneously. The band has reached a high level that goes far beyond the pop-rock medium in which they are intertwined. They probably are THE English band to follow in this decade. Based on this set and the last album I am a strong supporter and a fan! I could add a few more superlatives but the music must simply be heard, after all. There is a seriousness of purpose to No-Man. The best response is probably an awed, thoughtful silence. Then a keen anticipation to know what their next move will be.
Posted by Grego Applegate Edwards at 6:12 AM