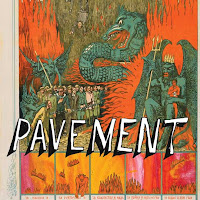 The US alt-indie rock group Pavement reigned in the underground of the '90s. They maintained a loyal following for their magnetically loose slacker-grunge lead vocals and garage guitar band ethos. They broke up in 1999 in a state of exhaustion and have been silent for ten years, much to the disappointment of their fans.

They plan to regroup and begin playing live again this coming September. To commemorate that and celebrate the more-or-less ten year anniversary of their demise, Matador released this month Quarantine the Past, a generous 23 track compilation of their best. That includes the singles, select album tracks, and a few of the early songs, altogether covering the 1989-1999 period.

I've been listening to the comp and it most certainly puts them in a good light. It's unpretentious guitar band music, making the most out of the elemental chord progressions, lyrics that show a bit of despair and disgust, alt drum throbbing. There's good-bad and bad-bad in this genre. Pavement is good-bad. The primitive charm of their delivery does not sound dated.
Posted by Grego Applegate Edwards at 4:18 AM