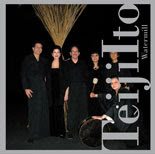 The MUSIC OF THE WORLD and WORLD MUSIC, if you think about it, are two different shades of the same thing. The first implies the sum total of all musics made anywhere at any time; the second resonates with the idea that this a particular music of a particular time and place, somewhere not where the listener happens to be. As technology evolves and intra-communications become ever more possible and intensified, so that regions become less isolated and more exposed to other regions and their music, that distinction can break down.

Now you can have music that combines a number of different world styles, and it may be made in your backyard. Music that is here where we are, but partakes of other and self musics too. Maybe that’s the way it’s always been anyway, but the process took more time in earlier ages, like watching the hour hand on an analog clock instead of the second hand. So American music, some of it at least, involves African and European elements combining with things that happened in the Caribbean, for example, and then transmutes in the US and further transmutes as it spreads out to the rest of the world.

Today’s CD has something of the minute-hand quality of that melding. Composer Teiji Ito’s Watermill (Tzadik) combines Japanese, Chinese, Tibetan, Native American and modern classical and avant elements in this piece that was originally performed for Jerome Robin’s ballet in New York, 1971. We can now listen to this new performance in 2008, so that collapses the time element too. The minute hand has temporarily stopped and we listen.

What of the music? It is compelling, sometimes meditative, sometimes extrovertly agitated, but always interesting. It’s one of those recordings that you have to think a little about where you would file it. And so the artist too. Where does he fit? All over the place. That’s the beauty of Tzadik Records releases, they often challenge accepted categories. That’s good in general and it makes Watermill a musical Zen rock garden with objects you don’t expect to find in there, not just rocks and sand. In your mind, you are challenged to arrange the elements in various ways. And of course there’s no one perfect way. An open age should have open-ended music. Are we there yet? Maybe.
Posted by Grego Applegate Edwards at 7:17 AM