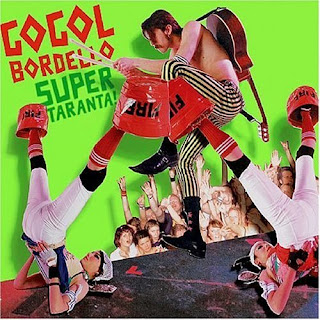 There’s a group out there called Gogol Bordello that dubs its music gypsy punk and they are headed by a guy who grew up in the Ukraine. Their music has a traditional Eastern European component, only it’s electric and aggressive. The first one of theirs I've heard, Super Taranta (Side One Dummy), is assuredly something unusual. Since it follows in the wake of the music from Borat (but without some of that politically incorrect content) could you say that there is a trend here? I don’t know about that but I like Eastern European stuff generally anyway, so it does appeal to me.

Are these folks the Eastern European answer to the Pogues? Not exactly, but not exactly not either. There are some nice moments for electric guitar fans, unexpected and skillful injections of metal into the mix.
Posted by Grego Applegate Edwards at 6:31 AM