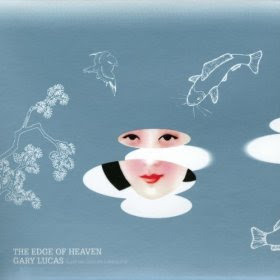 There are some artists out there who not only transcend category, they transcend themselves on a regular basis. Guitarist Gary Lucas is a great example. From his early days with Captain Beefheart through to today, one never knows what Mr. Lucas will do next, what musical traditions he will tap into and rework to his own needs and aesthetic. As with the best of those we should consider our consummate artists, the entire WORLD of music is the raw material with which he works.

The Edge of Heaven (Knitting Factory) shows this worthy trait in microcosm. Gary took a group of 1930s Chinese pop songs and rearranged them in a number of ways.

The album has just been reissued. It came out on an obscure label in 2001 and it is very good to have it with us again.

Gary shows both his guitar and arranging prowess in good light through the set (which includes some extra cuts not originally on the initial release). He gets into a little of his cascades of sound approach on the electric, plays a regular acoustic or resonator in finger picking or chordal styles, wields a slide guitar with raw bluesyness or in a more straightforwardly melodic way, sometimes sounds more like a Chinese Pipa in solo and duet with a Chinese instrumentalist, and plays as part of an ensemble that performs with a traditional Chinese vocalist. Western harmonies and sensibilities join with Chinese musical form in ways that keep the ears delighted.

Gary's guitar playing is out front through the entire proceedings and it is amazing and unique. He has developed a sound. . . a number of sounds that are unmistakably his at the same time as they up the bar on the expressive potentials of the instrument.

Gary Lucus turns in some moving performances and arrangements here. The music deftly combines impressive Lucas guitar stylings with some wonderful songs. It is like nothing you've heard before, I imagine. You do not want to miss it. It's available at Amazon (download or disk) as well as, I am sure, i tunes and other outlets.
Posted by Grego Applegate Edwards at 4:07 AM