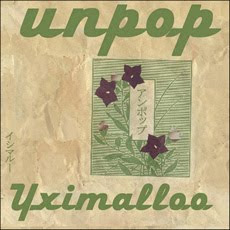 “Unpop”, something that Japanese underground music man Yximalloo apparently embraces, is the kind of music that has self-determination as its goal. The Unpop artist, according to Momus, who wrote the liner notes to the Unpop CD (ESP) considered today, is someone who thrives making a music that does not have huge mass appeal as its goal. It is a music that is determined to be unpopular in the conventional sense, yet is fiercely dedicated to an underground reception and eventual recognition in the larger scheme of things.

Now this is a pretty brave stance. Of course, it sort of assumes that this guy could turn around and make a widely successful pop recording. But more likely this CD presents the music Yximalloo hears and expresses come what may. It’s like imagining that Leadbelly could have led a Guy Lombardo type band, if he really wanted to. Probably not. That music just wasn't in him. Though I would have liked to have heard it if he tried!

The music on Unpop is a multilayered solo effort from Yximalloo--on guitar, laptop and a twisted vocal style that is much more a mumble and a voice inside your head than a clear “pop” presentation. So what of this music? At first I thought, “Ah, one of those home-made tapes made by a crank.” And in many ways it is that. You have a half-rendered version of Donovan’s “First There is a Mountain,” some interesting all-electronic pieces, some rather weird effects-laden vocalisms, and some other pieces in a more rhythmic style.

It’s pop, I suppose, in its linearity—it mostly has a one-damned-thing-after-another approach in common with your everyday fare. And there are occasional musical moments that allude to the conventional music world. Otherwise it’s a kind of punk electronics, a brazen button pushing plus human body producing collage of sounds, in a series of vignettes that have their own inner logic.

After a number of listens I assured myself that this guy is certainly an oddfellow, but the music has an eccentric appeal. It’s not for those with expectations of beats, riffs or hooks. And it surely will be unpopular in the sense intended. So he has completely succeeded—only if he finds a select group of listeners who appreciate what he hath wrought. I believe that will be the case. Oh, and if you want more information or want to order this CD, go to the ESP website (espdisk.com). Happy days of light to you.
Posted by Grego Applegate Edwards at 8:09 AM