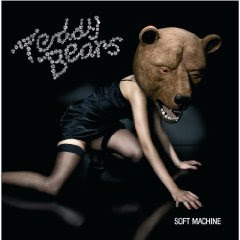 Dance music? Teddy Bears? When I received this CD, I thought, “Oh, well. May as well listen to it anyway.” Soft Machine (Big Beat) (that’s the name of the album, not to be confused with the group with that name—or the novel, for those out there with a literary mind). It is a mixed bag of tunes with a dance floor implied. There are guest vocals by Iggy Pop, Nineh Cherry and Elephant Man, among others. So dance music I generally steer clear of, because a.) I can’t or won’t dance; b) My experience of disco was so repulsive to me that I tend to avoid anything in the evolutionary chain that has a lineage related to it.

Well, this one isn’t bad. “Punk Rocker” has OK Iggy, though punk rock it’s not. And there are some West Indied flavored tunes that do not offend at all. It does not put me off and some of the tunes I liked. The music has some hair on it, for the most part. That’s about the best I can do for a dance thing. It’s quite OK music that happens to be danceable. If I went to a dance club and they played this stuff, I wouldn’t feel like I needed to run for the exit.
Posted by Grego Applegate Edwards at 7:29 AM