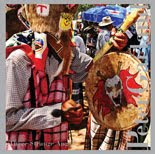 If my revised blog heading [that is, for my other "guitar" blog, see www.gapplegate.com/musicalblog.htm] seems a little whimsical, it is. I wanted to make it clear that the daily entries are guided by open-ended attention to any or all aspects of music today, not just related directly to guitars. There are bass players out there, other instrumentalists too, obviously, and all kinds of music. I don’t know of any kazoo players worthy of mention right now, but if I did I might mention them [my heading whimsically referenced Kazoo cadenzas for a few days, but I ditched that in the sober light of a Monday morning].

Guitar-related topics will still hog a large portion of the subject matter. I am not forcing the issue though to make this blog an adjunct to guitar sales. If something comes up related to that, fine. If not, not. If there was somebody over me calling the shots they would probably get rid of this blog. There isn’t, so it stays, a conduit to some thoughts and free for you to read or not as you choose. . .

John Zorn’s non-profit Tzadik label is one of the most far-reaching and adventurous concerns today. Literally all possibilities can be and are represented by their disks. So I’ve grabbed some of the summer-fall recordings and will be taking a look at them on and off in the next couple of weeks.

First up is a disk by composer and music conceptualist Peter Garland. Three Strange Angels is a 1992 recording long out of print which represents the early work of this minimalist oriented music maker. It varies from solo harp to small ensemble pieces. There are Amerind and Mexican traditional influences, adapted to Garland’s eclectic palette of presentational sound events.

I can’t say that this recording will convert anyone to experimental minimalism. It has moments of sheer aural tapestry that can intrigue, sometimes in a purely musical way, sometimes with an only-to-be-guessed semantic agenda. It is challenging music, even to those used to challenging music, because Garland’s vocabulary is his own (in a quasi-"ethnic" way) and you must learn it to “read” the meaning.

Like a few other modern american composers of the old-fashioned Yankee pioneering sort, Lou Harrison, for example, there is a bricoleur-like accessibility that is juxtiposed with a certain esotericism that transforms the music to another plane and causes the listener to think. Good. Where this music stands becomes clearer only after a bunch of listens. It's music that is difficult because it turns out to be easy and you didn't expect it to be that. It's easy only after you've gone through figuring out what it IS. Does that makes sense?
Posted by Grego Applegate Edwards at 5:54 AM